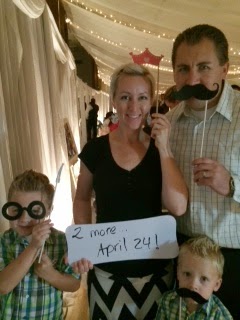 WARNING: This is a LONG post. For those of you here for the short version, we are expecting twins in April!

Now for the rest of you with some time on your hands, here’s the story of what cancer survivors go through to have kids after chemo:

When I was diagnosed with breast cancer, losing my hair didn’t seem like that big of a deal. Hair grows back. Even losing my health for close to a year wasn’t that big of a sacrifice if it meant being able to be cancer-free at the end of it. The double mastectomy was a pretty big blow, but hey, it wasn’t like I was losing an arm or a leg. I would deal with it.
By all accounts, I was doing pretty well with all of it. I was fine.
Until they told me I would most likely not be able to have kids afterwards.
That was most decidedly NOT fine.
Cancer could only push me so far. Giving up future children was over the line. WAY over.

My only option was egg retrieval through invitro before chemo started, since chemotherapy kills human eggs. I kept having a vision of myself on an island with volcano errupting. I saw myself putting my future children out onto a life raft and sending them out into the safety of the ocean while I stayed on the island to survive the erruption, or in this case, chemo.

After countless hours of prayer, and some very loud promptings from God (I don’t say that lightly, we had completely decided against the procedure until Heavenly Father intervened), Kurt and I decided to invest what little we had into the egg retrieval process that would save at least the genetic starts to future children.  I came out of my double mastectomy and Kurt started the shots the very next day while I was still in the hospital.

About a month later, trying to heal from two amputations and being pumped full of synthetic hormones, and just a few days before chemo started, I had my egg retrieval procedure. It didn’t go well, but we got five embryos frozen from it (most women can get 20-50 in one round, so five is actually pretty crappy).

And then I didn’t really think about them again for a good year-and-a-half. I was just trying to survive chemo and radiation. The doctors all said I needed to wait at least one year from the end of chemo, so that’s what I did. I hit that mark and children all of the sudden became the most important thing to take care of.

We started the process, which was more money than we anticipated and WAY more shots than should be allowed, and had the embryo transfer at the beginning of August. We put in two embryos, because that’s what you do. If you only transfer one and it doesn’t take, it is another few thousand dollars to get your body ready again. So yeah, you put in two.

I was not surprised in the least when twins were confirmed. Like I said, Heavenly Father had been very loud about this procedure being necessary, so I knew what was coming. Rather, I know who was coming.

They are my miracles. They are the very bright light at conclusion of cancer. Because without cancer, I wouldn’t have these two.
And these two needed to come. They are ready to come.

Am I sick? Horribly. Honestly, it is so bad.
Am I tired? Like I’ve only experienced during chemo.
I have been getting nightly shots of hormones for almost ten weeks in the same spot. Hint: I can barely sit down anymore.

Growing twins is hard.
But it’s hard to be anything but grateful about the privilege of carrying two little ones who need to come to Earth at this time. I am truly grateful to just be along for the ride.

So, if you haven't yet, this would be a GREAT time to buy The Others on Amazon, since formula is expensive... just putting that out there. Or tell EVERYONE you know about it.

And also, someone needs to pass a law that post-mastectomy moms get free formula for life. That should just be a thing.
Posted by Kristin Bryant at 11:16 PM No comments:

Visit kristinbryant.com for more information about the author and her new book, "The Others".

Kristin Bryant
Orange County, California, United States
Kristin Bryant is a Southern California native. She teaches psychology courses for an online high school and loves spending time with her family. Kristin's first novel, The Others, is coming out Summer 2013.